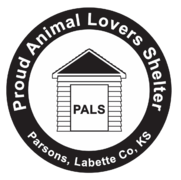 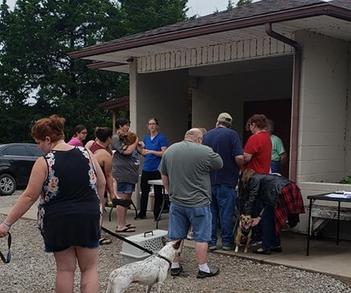 We had a great turnout for our big fundraiser November 2. Everyone enjoyed the dinner by Mom's Best, comedy by Jonathan Wilhoft, magic by Pete Walterscheid, and the fantastic bargains at our Silent Auction. Thanks so much to everyone who contributed and/or attended! 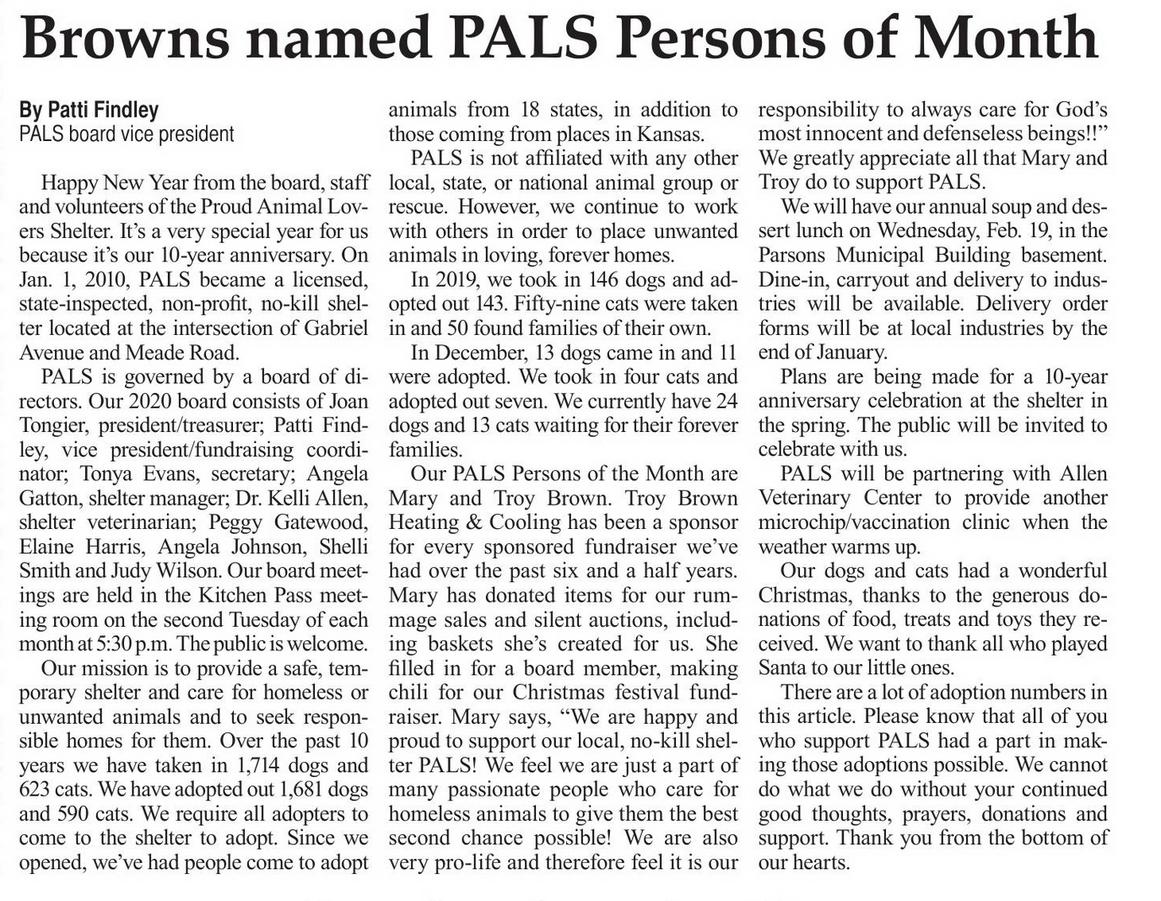 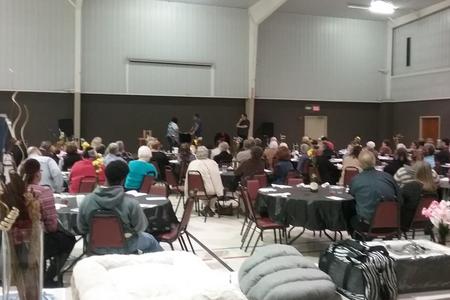 We had a great turn-out for our first Microchip/Vaccination Clinic on Saturday, August 3. Thanks go to Allen Veterinary Center and our anonymous donor who gave us the microchips. We will definitely be doing this again!

Parsons Police Chief Robert Spinks, Sgt. Jason Ludwig and Mike Pound toured the Proud Animal Lovers Shelter Tuesday, stopping here and there to pet a kitten or a dog excited to see people they hope will adopt them.

“I’m really impressed by the facility. I really am,” Spinks said. “I wish we had a facility that was twice or three times bigger.

“I wish we didn’t have a reason to have a facility,” Shanon Lansdowne told him.

“You and me both,” Spinks said. “I’ve said since I got here (in Parsons), the animal problem, it’s easy to point fingers, but the reality is it is a community failing. It’s education, accountability, enforcement. There’s little bit of all of that to go around.”

Stopping in the front office, Lansdowne presented Spinks with a microchip reader to help the new animal control officer, once another one is hired following Scott Swezey’s resignation from the position.

“We’re still recruiting for a new officer, so if you guys have ideas or leads, let us know. Our plan is to send that person to 180 hours of training around the U.S. so they will have sufficient tools in their tool bag,” Spinks said. “You guys know, it is critical, it’s the person. So, we’re trying to get the right person who understands the missing components we’ve had for a long time, which is education, outreach and closing that informational loop on calls is going to be critical. Not to beat on anybody, but it was a good time for a retirement and hopefully we’ll have a more comprehensive program in the future.”

Spinks reached out for ideas or people who might be considered. On the one extreme, Spinks said the animal control position would be great for someone like a college student studying animal sciences, whose taking a year or two off in between getting a master’s degree and wants some field experience.

“On the other hand, if we found someone who was around livestock or farming or had that day-to-day contact with animals, it would be a perfect matchup there, too. We’ve just got to find the right person,” Spinks said.

Spinks said with the help of PALS volunteers, he was able to have the salary reevaluated. PALS volunteers and others have attended city commission meetings recently to speak about the problems concerning stray dogs.

Spinks looked at the box containing the microchip reader and expressed his gratitude. The device was donated anonymously, but that person provided a written statement as to the reason for the donation.

“If an animal can be identified as soon as it is found and reunited with its humans, that saves a lot of time and money. Not to mention saving stress on the animal. It’s a great way to help reunite lost pets with their owners. I understand that not all animals are lost and a lot have been tossed out by irresponsible people. I see those pets here at PALS. However, I firmly believe that we can greatly reduce the problem through education, accountability and affordability. We can help educate people, kids especially, about being responsible pet owners. We can hold people that neglect, abuse and abandon animals accountable. We can help people support and care for their animals through affordable programs that help offset the cost of spaying and neutering, microchipping, vaccinations and registration/city tags.”

That support will be shown through a combined effort between PALS and Allen Veterinary Clinic from 8 to 10 a.m. Aug. 3 when they present a microchip/vaccination/deworming clinic at PALS, 24050 Meade Road, located at the west end of Gabriel Avenue. Prices of all services are being discounted.

Board member Patti Findley said the same person who donated the chip reader also donated microchips to PALS, allowing the shelter to sell them for $20 each as a fundraiser.

People are invited to bring their dogs or cats and get them their one-year rabies shot for $8, canine parvovirus/distemper for $13, feline viral rhinotracheitis/calcivrus/panleukopenia (FVRCP) for $13 and deworming for $7.

Someone from the city of Parsons will also be on hand to provide city licenses. Spayed/neutered animal tags are $6 and tags for animals not spayed or neutered are $10. The tags expire in two years.

Spinks was glad to see the clinic and PALS employees and volunteers working together to try to help members of the community.

“The fact you guys take more than just an interest but you have actually created something that benefits the community, that’s good stuff,” Spinks said.

He noted the Facebook trolls posting comments following the 21 gunshots fired in a Parsons neighborhood recently. Spinks said someone posted something like, “I guessthat happened during the donut break for the police department.’

“Wow, really? Thanks. We’ve got about a 90% clearance rate on violent crime and the national average is about 45 percent,” Spinks said. “What is interesting about that call is it took nine minutes for anybody to call us, and we do a canvass door-to-door and do you think one person, just one person … saw or heard anything? No.

“I wish there were more responsible citizens who would do more than just post anecdotal crap on Facebook. When I see folks like you who actually do something, my hat goes off to you. I truly mean that. Thank you.”

”And that comes from more than just chief,” Ludwig said. “That’s from all the officers in the police department. Anytime we get civilian help, somebody that doesn’t have to go that extra mile but does, we really appreciate it because it takes a lot off our shoulders. If you guys see a dog and you know who it belongs to, and you pick it up and take it to them, there’s 30 minutes out of the day an officer is not tied up on a dog call. And to be honest with you, people are a lot less likely to cuss you out about their dog.”

“You guys know, I’ve got my two rescue dogs, and one of my sons is a vet, so it’s a personal issue to me,” Spinks said. “Quite frankly, as I’ve gotten older and I’ve been in the business longer, honestly I enjoy animals more than I do people anymore. They don’t demand much. They’re happy to see you. … You know animals, they are pure of heart, and unfortunately we deal with another species that is not always pure of heart and unfortunately some of those folks should not be guardians of our animals. We will do whatever we can to possibly change that.” 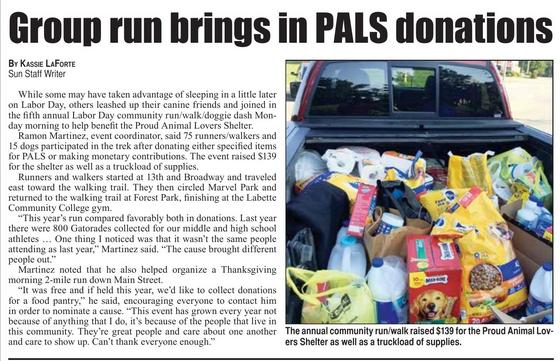 We had two very successful fundraisers in one week! For our Christmas Festival we served Soup/Chili and Cinnamon Rolls before the Parsons Christmas Parade on Thursday evening, December 5. Then on Saturday, December 7, we sold To-Go Soup/Chili and Cinnamon Rolls, along with other items, at the Holiday Marketplace in downtown Parsons. We greatly appreciate all who supported us at these events.